Everything I Need to Know I Learned from a Little Golden Book by Diane Muldrow is a New York Times best seller. The book offers life lessons reduced to simple maxims: “Is your life starting to feel like a circus? Don’t panic…today is a new day!” Illustrations from  Little Golden Books created between the years of 1942 to 1963 capture the spirit of the advice. The Pokey Little Puppy reminds us “to stop and smell the strawberries” and Tootle the Train demands that we “Frolic!” Favorite classic images instruct you to “Treat yourself” and “Kiss”.

Admirers of the Little Golden Books – the cardboard books with the gold foil spine – claim that the books have been uplifting people since World War II and that they still have much to teach. Muldrow reminds her readers that “our country has faced hard times of late.” She proclaims, “The chickens have come home to roost, and their names are Debt, Depression, and Diabetes.”

“Who is this book really for?”

There are seventy-eight illustrations in the book; thirty-eight have pictures of people. Of those thirty-eight, only two images include non-whites: Black folks are religious, right? 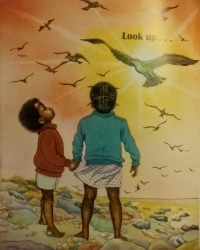 Memory Lane for Whom?

“Everything I Need To Know I Learned From A Little Golden Book is so overwhelmingly white-centered it pains the eye and pierces the soul of the millions of us who cannot, will not, claim that level of unconsciousness.”

The 1940’s, 50’s, 60’s were difficult and painful times for many Americans, but especially for African-Americans. Between those years over forty black men and women were lynched, Jim Crow law in the south was legal, and until 1964 blacks were denied the fundamental right to vote. The armed services were  desegregated in 1948 and schools were desegregated in 1954. But African-American soldiers and students still faced violence, bullying, or insult.

Other non-white cultures and identities were vilified, ignored, or made invisible. Japanese-Americans went from citizens to enemies. Native American children were forcibly sent to “Indian Schools” while their families were relocated to urban areas. Latinos, with the exception of saucy actresses and Desi Arnaz, were largely ignored. And, Puerto Rico was a colony with limited self-government.

A friend who is black, over fifty, and prefers to remain anonymous said, “As an individual, I do not see myself or my experiences in this book… I am not to the point of hating it, but it has nothing to say to me”.

Reviews of the book read like glowing advertisements. The Huffington Post writes: “Offers simple advice that is also very wise.” Publishers Weekly declares: “An optimistic and cheering trip down memory lane”. And the School Library Journal states “A fun and entertaining walk down memory lane.”

It scares me to know that this book was so well received by the white American public and was such a hit that the author was able to publish a series – a series that seems never ending.