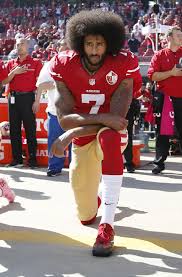 In 2016 Colin Kaepernick took a kneel to protest police brutality. The NFL owners   reported that they felt “under assault”.  Trump told them to “get that son of a bitch off the field.” And, fans reacted as if the football field was a political-free zone and told Colin that he “should just focus on the game”.

In 2017 Kaepernick remained an unsigned free agent. According to the Washington Post, signing Kaepernick “would be far more than a football decision.”  The Buffalo News reporter Bucky Gleason wrote that hiring Kap would bring “controversy over something that has nothing to do with football.”  And, Houstan Texans owner Robert McNair [now deceased] told fellow owners that the NFL “can’t have the inmates running the prison.”

Last September Nike used Colin’s activism in their Just Do It ad which read “Believe in something. Even it it means sacrificing everything.” Once again, people reacted.  A Louisiana mayor wanted to ban Nike products from the city. The hashtag “boycottNike” erupted with images of people burning Nike products. And, some Christian colleges banned Nike products from their campuses.

It is early 2019 and Kaepernick is no longer a professional athlete.  The NFL tried to ban players from any kind of protest, until they realized that such a ban was unconstitutional.  And, most recently, the Wisconsin GOP leaders removed Wisconsin-born Kaepernick from a resolution recognizing Black History Month and Kaepernick because they considered him too “controversial” to be included.

Let’s be honest. Kneeling is a gesture of respect. More importantly, it has only been white America who has reacted with such hostility to Kap’s support of the Black Lives Matter movement.  And, to other Black athlete’s who continued the conversation.  Remember Laura Ingraham telling LeBron James to “shut up and dribble”? It is white America who believes they have the right to tell Black and brown people when, where, and, how to protest.  It is white America who tells Black America who their heroes should be.

Nike does not speak for white America.  Nike is a global corporation.  Nike knows that many of their consumers are people of color.  Nike knows that “Taking the Knee” is the modern-day legacy of Tommie Smith and John Carlos giving the Black Power Salute at the 1968 Olympics. Nike knows that Black athletes have a long history of being social justice activists; and those beliefs have always cost them something, if not everything.

The irony is that Nike’s ad truly represents American patriotism. Because to believe in something, even if it means sacrificing everything, is the American way. Abraham Lincoln. Sitting Bull. Sacco and Vanzetti. Malcom X. So, white America, be honest with us about why you hate Colin Kaepernick.  Accept the the fact that like Muhammad Ali, Kap will go down on the right side of history.

Commentary, musings, and images; all in an effort to expose whiteness in the United States.