In a previous blog I wrote about Whiteface,  which I defined as the process of removing innate or natural facial characteristics (skin color; nose, lip, and eye shape; hair color and texture) to change the appearance of a person who is not-white, to make that person look as if they have Western-European ancestry.

In the United States, the standards of beauty have alway been defined by white Western-European standards. This is not to say that the notion or a creation of a uniquely “American look”, i.e. from the U.S., does not exist.  Of course it does.  But, the foundation on which the “wholesome and healthy American beauty” sits, comes from white Europe.

In aristocratic and oligarchic European nations, royal and noble women wore clothes that separated them from their subjects: they donned dresses, sleeves, and footwear that were neither practical, nor utilitarian. Those who visited the courts of kings and queens were able to see what was being worn by the sovereign classes and then copied those styles.

Without print and the ability to mass produce images, beauty was defined not so much by the physical attributes of a person, but by their born privilege to wear such clothing. The materials used during those times were extremely luxurious and expensive: velvet, brocade, and silk. The cost of those materials were prohibitive, and at times, illegal for the lowly or servile to wear or even own.

Portrait of a Lady called Jeanne de Marigny by Charles Beaubrun, circa 1860. 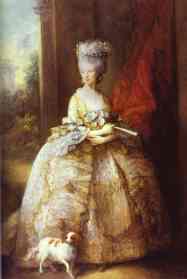 During Imperialism, beauty standards were still set by by the aristocracy.  Beauty was still defined by the privilege to live a luxurious life.  However, global travel and the imperial acquisition of goods created a new class. Wealth and power were no longer solely in the hands of the titled class, but also those of the merchant class.  And, more importantly, it was during Imperialism and Colonialism that beauty standards began to be determined by physical characteristics. White skin was beheld.

In Europe and the United States, during the Enlightenment until the late 19th Century, the idealized body type for women was determined by her stature and girth.  A woman with a full-body was admired because it epitomized an “idle” life; the patrician female spent her day weaving, painting, or playing the pianoforte. Her rounded and shapely body attested to cupboards and galleys that were well stocked.  Her skin was lily white because she need not be working in the fields. 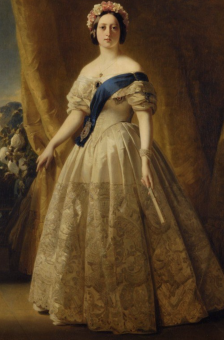 During Imperialism and Colonialism, white women began to travel outside of Europe for personal and political reasons: to engage in missionary work, to satisfy a curiosity about “exotic” lands”, or to write and explore. At the same time, the suffragette movement was growing. Women were demanding the right to vote, to own property, and to obtain individual wealth.  These women were entering the physical spaces dominated by men. By doing so, they were  seen as unwomanly and accused of being “masculine”. 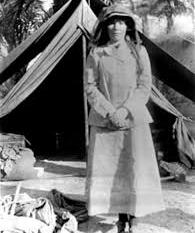 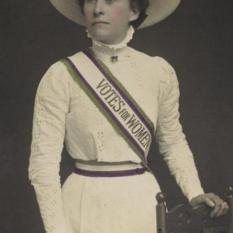 Respectable white womanhood was no longer determined by domestic or political space.  Geographical containment was no longer.   How then, could the suffragette desiring the right to work and vote or the adventurous white woman traveler retain her respectability?

“Many suffragists spend more money on clothes than they can comfortably afford.”

The woman traveler and explorer retained her modesty and honor by working alongside respectable men.  And, more importantly, by her body being juxtaposed next to the “inferior, uncivilized, colonized” woman of color.

In the 19th and 20th Century, numerous images of Black and Brown bare-breasted or totally nude woman were taken, constructed, and reproduced. The production of these images fathered the modern day studies of anthropology, criminology, and mental illness.  (What was the “mug-shot” if not the successor of the ethnographic study?) These images sexualized Black and Brown women and were used to entice European and American men to travel and live within the colonies.

French Postcard: “You can look, but you cannot touch.”

World fairs of that time contained “ethnological” expositions of African, East Indian, American Indian, and Latin American cultures and societies. These “human zoos” often emphasized the physical and cultural differences between Europeans of Western Civilization and non-European peoples: i.e., those who practiced a lifestyle deemed primitive.  The epitome of this exploitation is probably Sarah Baartman, a South African Khoikhoi woman who, due to the European objectification of her buttocks, was exhibited as a”freak show”attraction in 19th-century Europe under the name of the “Hottentot Venus”.

Against the ever-present backdrop of the “native” Black or Brown woman, who was continuously physically demeaned, immorally characterized, and sexually debased, white women were seen as beautiful, modest, and desirable.

As the modern woman’s life was no longer relegated to the parlor, a plump body was no longer fashionable.   Once she entered spaces dominated by men and it became acceptable to travel, work, and even exercise, her body then reflected that lifestyle.  A robust, strong, and healthy body became desirable, and thus the definition of beauty.

Present day beauty standards are still  defined by those with political, economic, and cultural power.  They are people who live the life of luxury, whether they are New York City socialites, Washington political powerhouses, or Hollywood celebrities.  And, nothing exemplies luxury like leisure travel.  For white women today, that leisurely lifestyle is defined by the ability to vacation at the beach. However, the only proof needed: a beautiful sun-tan.

Tanning is associated with wealth, luxury, and leisure.

But, white women tan for another reason. On white skin, a tan creates the illusion of a slimmer body.  Tanned skin makes white skin stand out.  It gives white skin a fresh glow.  And, it shows body contours and muscle definition.

White women tanning are not rejecting a white racial identity. White women tanning are not trying to culturally appropriate Blackness or Brownness.  They are not trying to be seen as being Black or Brown. Instead, they are attempting to enhance their white cultural capital by being perceived as a member of  America’s ruling class: the  woman who has the time and money to relax, exercise and, spend time in the sun.